Due to COVID-19, our business is currently closed. Unfortunately, we are unable to accept online orders until further notice. Sorry for any inconvenience.
Blog Categories
Blog Search

Parking Sensors vs Reverse Camera - Which is the best for your BMW 5 Series?

Which is the best for your BMW 5 Series?

The goal of this article is explaining the main differences and the pros and cons of each technology so you can make an educated decision.

Since ‘Surround View’ and ‘Parking Assistant Plus’ systems are only available as an option on a few BMW Series 5 trims, this article will focus on parking sensors and reverse cameras.

Parking sensors, also known as proximity sensors, are the precursors of Parking Assist Systems. They can use either high-frequency sound waves (ultrasonic sensors) or electromagnetic fields (radar type sensors) to alert the driver of obstacles. Older vehicles used a distinctive sound to alert the motorist about such obstacles, while on BMW vehicles this was quickly replaced with current audiovisual alerts.

PROS: parking sensors are a standard feature on most BMW Series 5, even on older models. However, in case you need to install them, there are OEM-quality parking sensors retrofit kits available.

CONS: even the most recent parking sensors suffer from lags when detecting obstacles. This is the key disadvantages of parking sensors, you can’t rely 100% on its accuracy.

Since the introduction of the reversing cameras in the BMW 5 Series, the driver assistance systems have never been the same again. Reverse cameras are arguably the single most important safety system only behind current Parking Assistant Plus. Recent research conducted by the U.S. nonprofit organization Insurance Institute for Highway Safety (IIHS) shows how the reverse cameras are a key element in the reduction of backing crash involvement rates. Having “a pair of eyes” to look at what is behind the car is unquestionably an advantage.

PROS: current OEM-quality backup cameras provide high-definition color images and superimposed guidelines to help the motorist to maneuver even in tight parking spots. Recent technologies allow reverse cameras to “detect” stationary and moving objects to further increase safety while parking. An additional benefit of reversing cameras is that they can integrate with parking sensors to provide an even more robust parking assistance system.

Parking Sensors vs Reverse Camera - Which is the best for your BMW 5 Series?

Each system has its advantages and disadvantages. Parking sensors are cheaper than the reverse cameras, however, they don’t provide the same level of safety while parking. On the other hand, reverse cameras are more expensive but provide a significant improvement in safety and convenience while doing reverse driving maneuvers.

If you own a BMW 5 Series that already has parking sensors then the optimal solution is quite obvious. You may install a reverse camera retrofit kit that complies with BMW standards and enjoy the benefits of both systems. 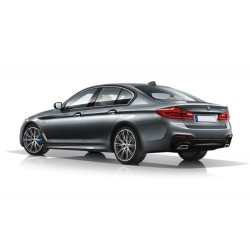